All One Together Campaign Launch 2019 – Panel Discussion 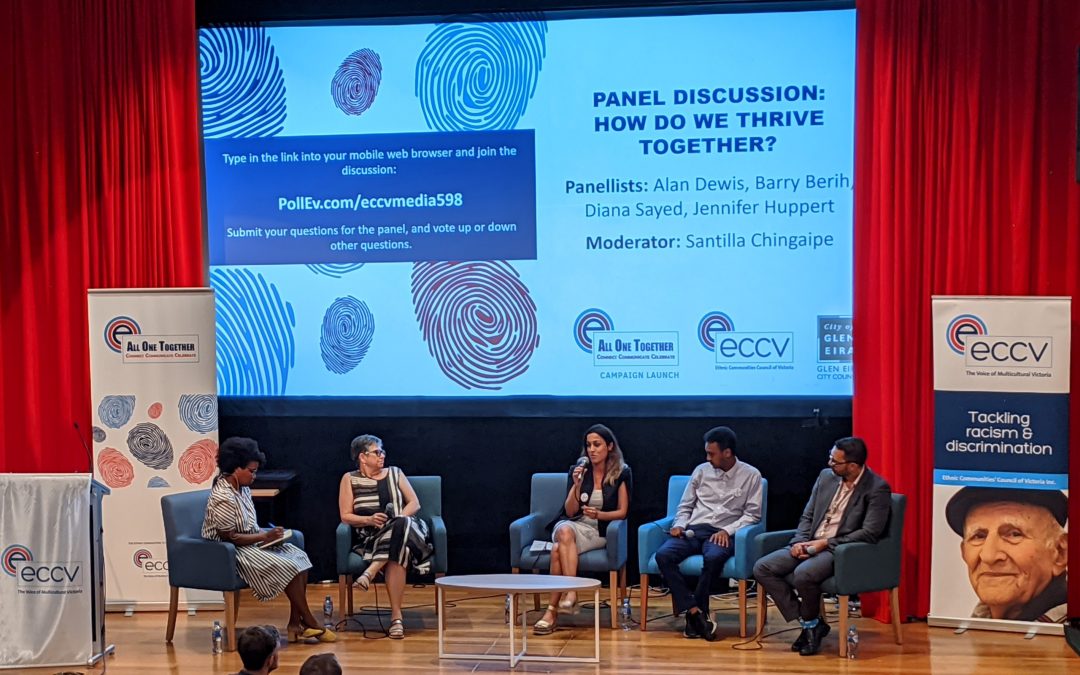 ECCV’s All One Together campaign seeks to highlight connections between Victorians regardless of where we come from and what we look like, support community conversations, and celebrate the actions that are contributing to address racism and effectively building an inclusive society for all.

To mark the launch and to celebrate International Human Rights Day (10 December) in 2019, we hosted a panel conversation with eminent human rights lawyers and activists, who discussed how racism is still a challenge in our communities, and suggested actions we can all take, as citizens and organisations, to ensure that we thrive together:

The panel was moderated by award-winning journalist and filmmaker Santilla Chingaipe.

Santilla is an award-winning journalist and filmmaker based in Melbourne. Her work explores contemporary migration, cultural identities and politics, and she is a member of the federal government’s advisory group in Australia-Africa relations. Santilla curated Australia’s first all-day, anti-racism festival, Not Racist, But…, and her film credits include the landmark SBS documentary, Date My Race. Her latest documentary series Third Culture Kids is currently streaming on ABC iView and she reports regularly for The Saturday Paper.

Alan commenced at Victoria Legal Aid as Associate Director, Aboriginal Service in November 2018. He is a proud Malu Ki ai and Samsep man from the Torres Strait who is a lawyer with over 20 years’ experience in the justice system, in a variety of roles including policy design and delivery, community engagement, legal advocacy and policing.

Prior to his appointment at Victoria Legal Aid, Alan was the Manager of Aboriginal Policy and Engagement at Family Safety Victoria where he led the development of the Dhelk Dja: Aboriginal 10 Year Family Violence Agreement, an Aboriginal-led strategy built on the foundation of Aboriginal self-determination that is designed to ensure Aboriginal families and communities are strong, safe, thriving and living free from family violence.

Born in Australia to Eritrean parents, Barry is a community leader passionate about getting to know young people and inspiring them to realise their dreams. He does this by collaborating with organisations such as the Centre for Multicultural Youth, Co-Health, YMCA and Kensington Legal Centre. He has also started an organisation called Young Australian People that engages young people from refugee and asylum seeker backgrounds in leadership and development programs and prepares them for employment by providing training, internships, mentoring and volunteering opportunities. Living with mild cerebral palsy, Barry is keen to share his experience of growing up, dealing with adversity and the value in building good relationships with family and community. He was recently awarded the 2019 Award for Meritorious Service to the Community by the Victorian Multicultural Commission.

Diana Sayed is a campaigner and international human rights lawyer. Prior to joining Fair Agenda, she was a senior crisis response campaigner at Amnesty International Australia where she worked on issues pertaining to war crimes in Syria, civilian casualties in Iraq, women’s rights in Afghanistan, and genocide in Myanmar against the Rohingya Muslim minority community. She is passionate about taking an intersectional approach to gender equality.

Diana has worked as an advocate, campaigner and disruptor defending human rights activists and their rights and freedoms in the face of oppressive government and state practices for over 10 years. An Afghan-Australian woman from refugee migrant parents, Diana has the lived experience of visible minorities in Australia and advocates for space to have all voices heard and to have a platform to speak equally and freely.

Jennifer Huppert, President of the Jewish Community Council of Victoria and VEOHRC’s Board member

Jennifer has been President of the Jewish Community Council of Victoria (JCCV) since November 2014, having first joined the JCCV executive in November 2011. Jennifer is also a member of the Board of the Victorian Equal Opportunity and Human Rights Commission. Previously, Jennifer has served on the boards of a number of not for profit organisations, including National Council of Jewish Women of Australia Ltd, the B’nei B’rith Anti-Defamation Commission, The Jewish Taskforce Against Family Violence and Youth Connect.

From February 2009 to November 2014 Jennifer was a member of the Legislative Council of the Parliament of Victoria representing the Southern Metropolitan Region, and prior to that was a director of the Emergency Services State Superannuation Fund.

Jennifer is a lawyer with nearly 30 years’ experience, practising largely in the area of commercial property, and is currently a special counsel at KHQ Lawyers.